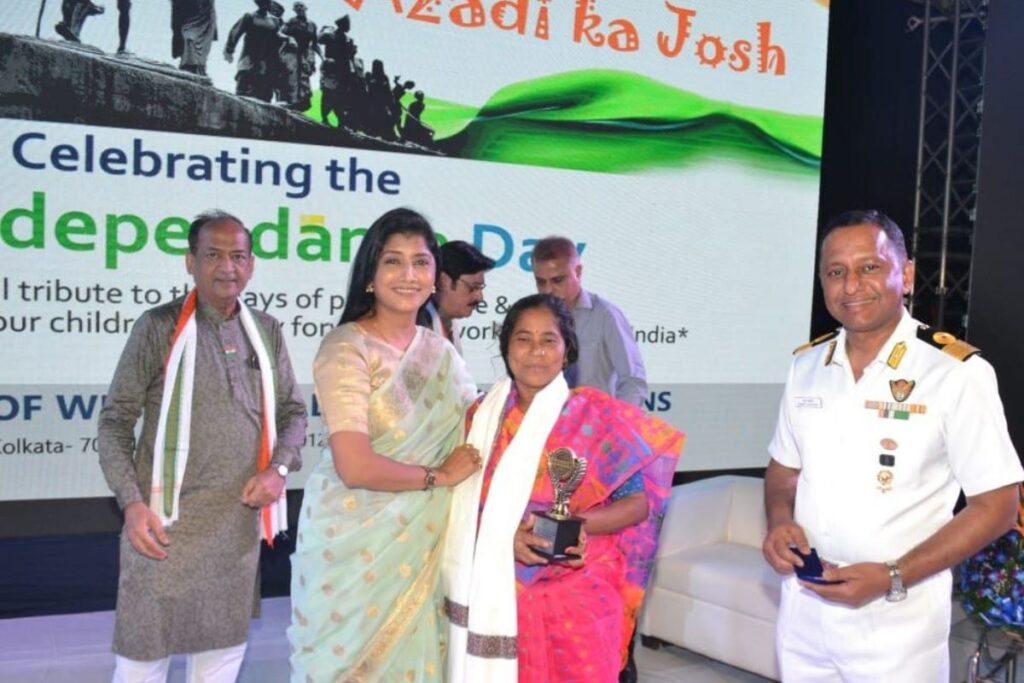 August 17: The Confederation of West Bengal Trade Associations (CWBTA), the eastern region’s apex trade body, organized a cultural program “Azadi ka Josh” on the eve of Independence Day to salute and celebrate the 75th Year of Indian Independence at the Kala Mandir, Kolkata. A musical medley of patriotic songs and honouring exemplary citizens were the highpoint of the function.

Chief Guest, Commodore Sameer Choudhary, Group Commander National Cadet Corps HQ Kolkata, and Mr Sushil Poddar, President, CWBTA, inaugurated the gala musical and felicitation function. Urging students to read up some of the life-altering self-improvement books like The 5 AM Club, The 7 Habits of Highly Effective People, The 8th Habit, Rich Dad Poor Dad, Commodore Choudhary said, “I would ask my young friends to read, chew and digest these books as you grow up the quality of work that you offer to the world will indicate the respect we have for ourselves. These books have been good enough for me, and I am sure they will also be for you. To ensure that each citizen of this mighty country contributes our very best every moment, every day and night towards the growth of our society, family, and locality.”

Purnima Sheuli, mother of Commonwealth Games weightlifting gold medalist Achinta Sheuli, on being felicitated by CWBTA, said, “I am here as a proud mother. My son has not only made me proud but also the whole nation. I am very happy to be here.” Mr S L Gupta, a member of CWBTA, announced a personal contribution of Rs 1 lac to Achinta Sheuli and his family and a sum of Rs 50,000 each to Veer Naris Smt Manikuntala Das Mahapatra, wife of Naik Late Kanak Kanti Das Mahapatra and Smt Nirmala Devi. They lost her husband, Late Sailender Kumar Singh while serving the nation.

“It is a great privilege to welcome our Chief Guest, Sameer Choudhary, a decorated Navy veteran. We are also honoured to salute our nation and felicitate the family members of Martyrs, the young nation builders and achievers of India. We also pay our humble tributes to the `Veer Naris’ or brave women whose near and dear ones laid their lives for the nation. We believe that recognizing the contribution of young students in nation-building and encouraging them to keep up their good work is very important for the future of our country,” said Mr Sushil Poddar, President, CWBTA.

CWBTA also honoured `Veer Naris’ – the women family members of Martyrs who laid their lives for the nation, which included Smt Manikuntala Das Mahapatra, Wife of Naik Late Kanak Kanti Das Mahapatra of 1871 Artillery Regiment was a part of a Quick Reaction Team in Doda district in Kashmir who was seriously injured in operation and later laid his life. Another Veer Nari honoured was Smt Nirmala Devi, who lost her husband, Late Sailender Kumar Singh of 14 Rajput Regiment, while patrolling in the jungles of Kashmir in late January 2001 and was fired upon by a group of militants.

MeghaGas on a mission to make India Energy-efficient