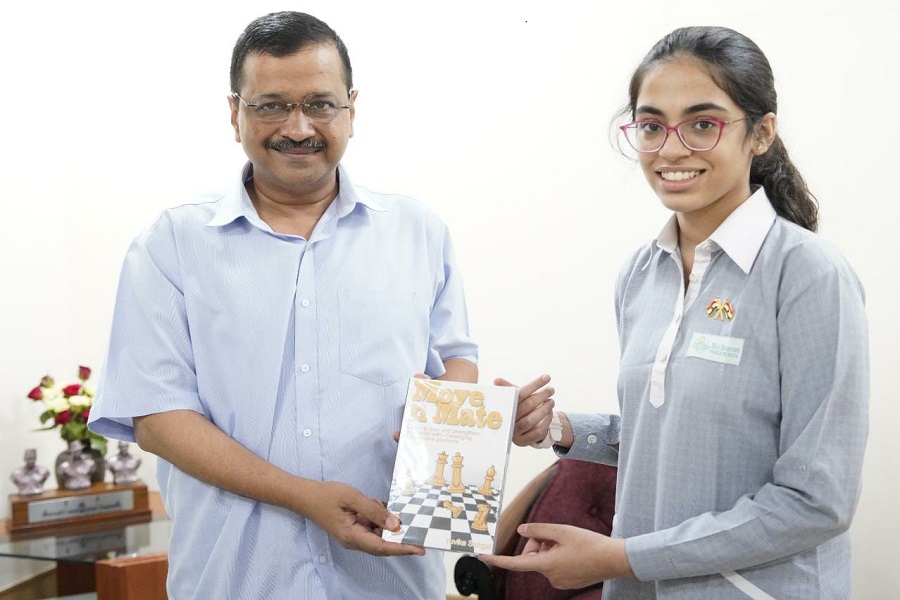 New Delhi: Yuvika Sehgal is a chess prodigy and an exceptional all-rounder at the age of 14. She is not only good in academics, but she is also well-versed in the moves in chess. She is the recipient of numerous awards and accolades in chess tournaments in India at such a young age. Born and brought up in Delhi, Yuvika studies at Bal Bharati Public School, GRH Marg. She is an inspiration for many children her age. The FIDE-rated chess player was introduced to the game when she was just nine years old. Once she developed an interest in it, there was no stopping this girl.

Yuvika first learned the game of playing chess with family members. As a child, she used to practice the game on her iPad. Her teachers noticed her proficiency in chess and encouraged her to participate in school competitions. She participated in the CBSE Zonals from her school team and qualified for the CBSE Nationals, to everyone’s surprise.

To sharpen her skills in the game, she practices the game for two to four hours daily. Being a chess fanatic, she enjoys the intricacies, the twists and turns, and the novelties that each game brings. This has also helped her a lot in her academics and has been the catalyst for developing her memory, problem-solving skills, time management and focus.

Her zeal to learn every move of the game and understand it deeply propelled her to pen down her knowledge of the game into a book on chess when she was just 13 years old. This made Yuvika the youngest author in India – and perhaps in the world – to write a book on chess. Move n Mate, Yuvika’s book on chess is a guide to chess for beginners with 500 checkmate-in-one move positions. She is an International Chess Federation (FIDE) rated player. She is certified by All India Chess Federation, Delhi Chess Association and India Book of Records.

Yuvika won bronze in the Under-17 CBSE Nationals in 2019. She also participated in Commonwealth Chess Championship Under-14 Girls in 2019, where she ranked 19th. In 2021, she secured 11th rank in Western Asian Youth Under-14 Girls. She became Delhi State Under-15 Girls Champion in 2022, ranked 16th in the National Sub Junior Girls, 2022, and qualified for the World Under-16 chess championship.

Born on January 17, 2007, to Nitin Sehgal and Sonia Sehgal, Yuvika has made her parents proud. She has been felicitated by many prominent personalities for her achievements. Some of the prominent names include IPS Jatin Narwal, Director, Department of Sports, Ministry of Youth Affairs and Sports; Debasree Chaudhuri, Minister of State, Women and Child Development, Government of India, Chairperson, Delhi Commission for Women; Kiren Rijiju, Cabinet Minister for Youth

Affairs and Sports. For being the youngest author to write a book on chess, she has been felicitated by Delhi Chief Minister Arvind Kejriwal and Deputy Chief Minister/Education Minister of Delhi Manish Sisodia. India TV’s Rajat Sharma also invited her for an interview over tea.

Yuvika led an initiative to fulfil her zeal to teach chess to the underprivileged at the age of 14, spreading awareness about the advantages of chess in student life, especially in studies. She has helped and interacted with more than 2000 students from cluster areas and government schools. She gave chess classes in cluster areas, government schools and Rain Baseras on weekends.

She has also donated 300 copies of her book to the underprivileged, using the earnings from the retail sale of the same. Working on women empowerment, she also donated 100 chessboards to these students and government schools. Yuvika is also a meritorious student. She made her parents proud by scoring 97% marks in class 10. She divides her time between academics and chess as per her schedule and takes both of these responsibilities seriously. She dreams of becoming a grandmaster one day, and if her achievements thus far are any indication, her dream will surely come true.

If you have any objection to this press release content, kindly contact pr.error.rectification[at]gmail.com to notify us. We will respond and rectify the situation in the next 24 hours.